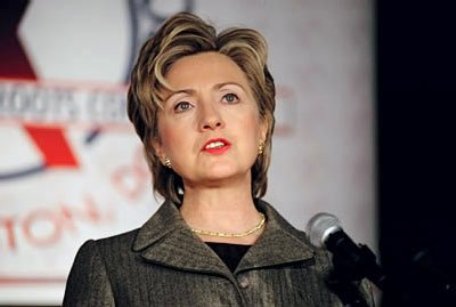 Hillary Diane Rodham Clinton or simply Hillary Clinton, is one of the most well-known women of our 21st century. She rose to prominence in 1993, when she became First Lady of the United States (FLOTUS), driving her husband, Bill Clinton through two terms as President.

Hillary is the firstborn child of Hugh Rodham, affluent and successful fabric store owner, and Dorothy Emma Howell. Hugh was a staunch Republican from Pennsylvania while Dorothy, a closet Democrat, had left her own dysfunctional home at the young age of 14, and worked as a nanny in her early years.

Hillary was born on October 26, 1947 in Chicago, Illinois, her other two siblings being Hugh E. Rodham, Jr. (born 1950) and Anthony Rodham (born 1954). Hilary says that her parents inculcated in her the importance of hard work, self-reliance, service to others, and a love of God and country.

As a young woman, Hillary often worked as a babysitter, both after school and during her vacation. She often took care of children of migrant Mexicans who came to Chicago for itinerant work. Hillary had also applied to NASA and was shocked when she learnt that girls weren’t accepted for the astronaut program.

While in law school, Hillary met and fell in love with her future husband, Bill Clinton. In the spring of 1971, Hillary introduced herself to Bill Clinton, whom she had seen around the Yale campus. They shared a common interest in social justice and politics, and began, what would become, a lifelong relationship.

Hillary graduated from Yale in 1973, after which she enrolled at the Yale Child Study Center and completed one year of post-graduate study. Here she was involved in new research on early childhood brain development.

She was also actively engaged at the New Haven Hospital, where she took on cases of child abuse and the city Legal Services, providing free legal services to the poor. Once she graduated from law school, Hilary served as staff attorney for the Children’s Defense Fund in Cambridge, Massachusetts.

In 1974, when Bill returned to Arkansas to pursue his political career, Hillary decided to move to Washington to work as a member of the impeachment inquiry staff advising the House Committee on the Judiciary during the Watergate investigation.

However, unfortunately, with President Richard Nixon’s resignation later that year, Hillary’s job too, came to an end. At this juncture, Hillary made a life-defining decision to move to Fayetteville, Arkansas to be with Bill. It was here that they both taught at the University of Arkansas.

Bill and Hillary got married in 1975, in a small ceremony at their home. Just before Bill proposed to her, he had secretly purchased a small house in Fayetteville that Hillary had once remarked that she liked. Once Hillary accepted his proposal, Bill revealed to her that they owned the house. They lived here briefly, before relocating to the state capital of Little Rock, Arkansas, from which he conducted his first campaign, for U.S. Congress.

In 1979, Bill became governor of Arkansas, and in February of 1980, Hillary gave birth to their daughter Chelsea. In 1983 she was recognized as Arkansas Woman of the Year, and Arkansas Young Mother of the Year in 1984; in 1988 and ’91 she earned a spot on the National Law Journal’s list of the 100 most influential lawyers in America.

In 1993, the couple moved back to Washington when Bill was elected America’s 42nd president. Hillary was the first FLOTUS to have a postgraduate degree, her own professional career, and her own office in the West Wing of the White House. And she was the first since Eleanor Roosevelt to take on a prominent role in policy-making.

One year into marriage, Hillary joined the Rose Law Firm in Little Rock, Arkansas. A few years later, President Jimmy Carter invited her to join the board of the Legal Services Corporation in 1978. She holds the honor of being listed on the “The 100 Most Influential Lawyers in America” not once but twice.

As First Lady, Hillary successfully initiated the Children’s Health Insurance Program in 1997. This was a federal effort that provided state support for those children whose parents were not able to afford health coverage. She was also instrumental in increasing the research funding for illnesses such as prostate cancer and childhood asthma at the National Institute of Health.

As First Lady, she also gave voice to the illnesses that were affecting veterans of the Gulf War, with the possibility of their suffering the toxic side effects of the chemical “Agent Orange” used in warfare.

But Hillary’s life as FLOTUS was far from simple. The Clintons’ private life was marred by rumors and accusations around Bill’s extramarital affairs, culminating in the scandal that saw Bill Clinton impeached and which threatened to bring down his presidency. Bill had lied to his wife of 23 years, lied under oath to a grand jury, lied on national TV, and lied to his 18-year-old daughter.

Needless to say, the affair completely broke down Hilary. Pastry chef Roland Mesnier recalls doing whatever he could to help Hillary, saying that he often made Hillary’s favorite dessert, mocha cakes, during the height of the scandal.

He says, “Hillary would reportedly call the pastry shop in the late afternoons and say, in a “small, unassuming” voice, ‘Roland, can I have a mocha cake tonight?’”

The months following the affair were nightmarish for everyone. Bill Clinton would become the first sitting President to testify before a grand jury investigating his conduct and admit he’d had inappropriate relations with “that woman.”

The president paid for his indiscretions not just publicly, but at home as well. It is said that for three or four months, Hilary made Bill sleep on a sofa in a private study attached to their bedroom, on the second floor, rather than share the same bed.

But later, Hillary decided to stand by her husband, becoming one of his strongest supporters. In 1992, she defended him and their marriage in a notable and historic 60 Minutes interview, reaffirming her commitment to her marriage.

Hillary decided to continue to stay with Bill and committed herself to her own political career, as well as Bill’s. Although she was criticized for not leaving her straying husband, Hillary was determined to making it work.

Forgiveness is a way of opening up the doors again and moving forward, whether it’s a personal life or a national life. ~ Hillary Clinton

In the Bible it says they asked Jesus how many times you should forgive, and he said 70 times 7. Well, I want you all to know that I’m keeping a chart. ~ Hillary Clinton

You don’t walk away if you love someone. You help the person. ~ Hillary Clinton

As per a survey in 1996 by non-partisan fact tank Pew Research Centre, the First Lady was often described as “strong, dishonest, intelligent’ to “strong, intelligent, brave, loyal and good” two years later after Bill’s confession, according to Hillary’s Choice.

By the time Bill was acquitted in 1999, Hillary was already making plans for her next phase, for the first time focusing on her own political career. After her husband’s service, Hilary followed her own political path and went on become the U.S. Senator of New York where she served two terms from 2001 to 2009.

In 2007, she announced her intentions of running for president for the 2008 presidential election. After losing the Democratic nomination to Barack Obama, she was appointed Secretary of State where she served the position from 2009 to the beginning of 2013.

In her recent memoir, Hard Choices, she offers an inside account of the crises, choices, and challenges she faced during her four years as America’s 67th Secretary of State, and how those experiences drive her view of the future.

Hillary Clinton is currently in the running for the 2016 Presidential election. In this endeavor, we wish her all the very best.