How To Protect Yourself: Self-Defence Techniques For Women 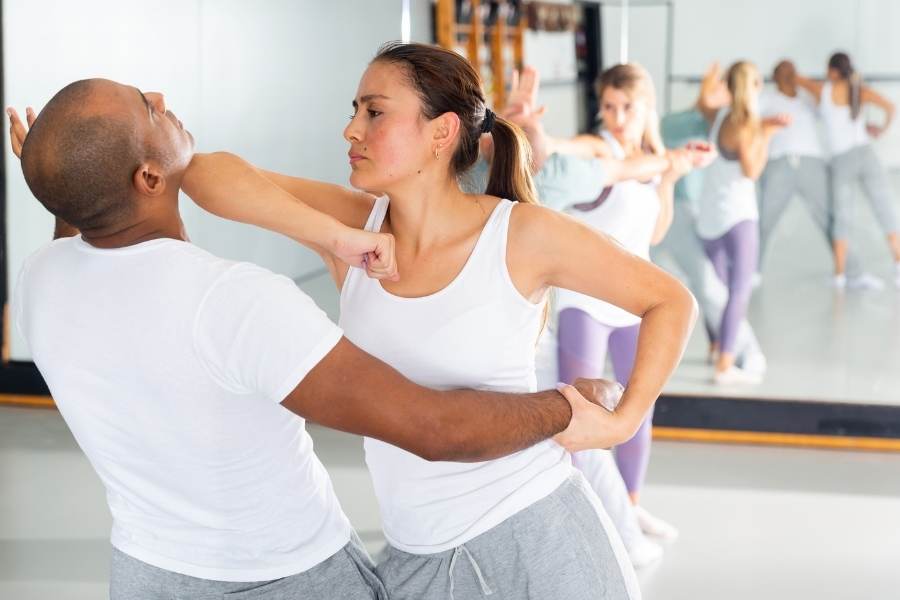 You don’t have to be Sandra Bullock in Ms Congeniality to learn how to defend yourself from roadside goons. A little confidence, and a few simple self-defence tricks, will help you take your personal safety into your own hands. Pallavi Bhattacharya reports.

A typical Bollywood film sequence of a woman confronted by goons is apt to show the woman panicking, completely at a loss on how to defend herself, and helplessly screaming “bachao“. As the miscreants come close in, the hero appears out of nowhere to beat the goons black and blue. The goons take to their heels as the tearful woman rushes into the arms of her gallant hero.

In real life, women in a similar situation are not lucky enough to have a handsome hero save them. Instead of waiting for a knight-in-shining-armour to come to the rescue, the wiser course of action for every woman would be to empower herself to be her own defender.

The first and foremost protective shield that a woman can spin around herself is that of self-confidence. John L. Mascarenhas who conducts workshops on personal safety for women advises, “Rapists look for someone who is meek. Stand in the Alexander Technique as it is a poise projecting self-confidence. Stand straight without slouching, concentrate on the top of your head, look upwards, keep your chin up and shoulders straight.”

John has extensively researched atrocities against women and has interacted with sex offenders on what factors pushed them into committing the crime. Analysing the psyche of a rapist, John observes, “Rape is about domination rather than lust. This may explain why crimes against women are far higher in patriarchal Delhi than cosmopolitan Mumbai.”

“It is a myth that affluent, handsome and educated men are not rapists. In fact, air hostesses are quite prone to rape and molestation. And groping occurs a lot during Page 3 parties. Rapists usually target girls who are timid, unsure of themselves and without family or societal support. Eighty per cent of the rapists actually know their victims.”

“Rapists sometimes go through biorhythms. During certain days or weeks of the month, they undergo severe psychological disturbance or a psychic attack.

During that time, irrespective of who that woman or girl is, he will try to overpower her. They may treat each and every woman including their mother as sex objects. Pornographic videos stimulate crimes like these”.

John’s classes on personal safety, teach women simple self-defence skills. The basic techniques can be learnt in just an hour. The weapons to strike out at an offender can be spelt out with a simple acronym – S.K.Y (formed by the first letters of each of the weapon names).

The targets (vulnerable points) where the offender should be struck, can be remembered with the simple acronym G.E.T (formed by the first letters of each of the target names):

Knees, Finger stabs and Y-hands are used to strike the groin, eyes and throat respectively. While striking the attacker, you should use your other arm as your protective shield.

Pull him forward to kick behind his knee. Then pull him and throw him down. You may need to finger stab him in the eyes again and run away immediately to save yourself.

A good way to distract your attacker making it easier for you to strike him or throw him down is by shouting out at and pointing to an imaginary person. (Eg: Call out ‘police’ or ‘excuse me’ even if there’s nobody there.)

When your attacker looks in the direction of the imaginary person, even for a moment, strike him and throw him down. You may also push your attacker against the wall which will hurt him.

If more than one person attacks you, strike him and push him against another attacker so that you can injure them both simultaneously.

If someone holds your hand, free yourself by making your hand into a fist, bending your elbow to raise your arm vertically and then yanking the attacker’s hand out by jerking your arm sideways.

“Other than these you may also use biting, pinching, throwing and spitting on the face which serves as primary weapons of distraction. Weapons of opportunity include your watch, lipstick, pen, hairbrush, stones and mud,” advises John.

“If you think someone is following you, cross the road and then go back in the opposite direction. If he is still coming after you then you may be sure that he has bad intentions.”

“Use verbal or physical self-defence depending on the gravity of the situation. For situations like groping on public transport, you could sternly warn the person troubling you to back up, stand decently or keep his hands to himself. You should also let others in the crowd know that he is harassing you.”

It is always not possible to take your father, brother, boyfriend or a trusted male friend along with you banking on male protection. When an attacker sees a lady defending herself he is taken aback and gets daunted.

Pleading helplessly will only encourage the sadist in him to overpower and torture you further. But just knowing a few of these simple self-defence methods will make you confident when you go out on the streets alone. So the key to safeguarding yourself simply lies in empowerment.

John L. Mascarenhas is a Senior Officer, working for the Tata Power Company Ltd. for 27 years. An expert in several Martial Arts like Chinese Kung-Fu, Karate, Judo, Tai-Chi, and Ju-Jitsu, he is also our country’s topmost instructor, of Women’s Self-Defence. During the last 25 years, he has trained innumerable men, women, youth and children, in Personal Safety and Crime Prevention.

As part of his mission towards ‘ Women’s Empowerment,’ he has trained scores of women, which include, school and college girls, working women, lady police personnel, hotel staff, and housewives. He has written a training manual, for our military commandos. His system of Self-Defense is recommended by Julio Rebeiro, Ex. Director-General of Police.

John is currently training over 1000 Policewomen attached to Mumbai and Thane Police. Over 150 Girls attached to the Central Industrial Security Force ( International & Domestic Airport Security ) are also receiving training from him. John was recently felicitated by the Mumbai Police Commissioner for his contribution.