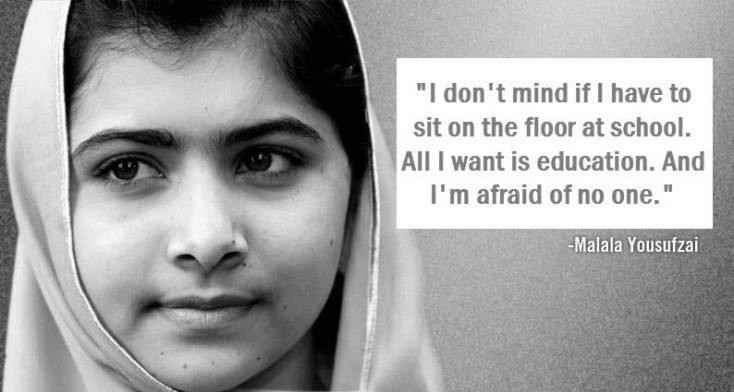 Born on 12th July, 1997, Malala Yousafzai had the courage to defy the Taliban in Pakistan and speak up for child rights and girl’s education, in particular. In 2012, she was shot in the head by Taliban gunmen, but survived the ordeal and went on to become a messenger of change.

Born to schoolteacher father, Ziauddin Yousafzai (also a Pakistani diplomat and currently United Nations Special Advisor on Global Education) and mother Thorpekai, she had been interested in social issues as a child. For the few first years of her life in Swat Valley, Mingora, Pakistan, she had been a normal kid, attending the school her father had founded.

Initially, Swat Valley was a peaceful town, known to be a popular tourist spot and its summer festivals. However, by 2004 the Taliban had already gained control of the territory and things began to change.

After the Taliban began attacking the girl’s schools established in Swat, Malala gave her first international speech in September 2008 at Peshawar, Pakistan. Her talk was titled, “How dare the Taliban take away my basic right to education?”

A year later in 2009, she was actively blogging for the BBC about life under the Taliban rule and the atrocities the children faced. She used the pseudonym “Gul Makai” to hide her identity. It was in December 2009 that she was exposed as the BBC blogger.

Malala continued to get a growing public platform and continued her speeches and addresses about child rights, women rights and right to education for the girl child. In 2011, Malala was nominated for the Children’s Peace Prize, and in the same year, she received the Pakistan’s National Youth Peace Prize.

When Malala was 14 years old, she was already a top target for the Taliban and her family learned about the death threat issued by the terrorist group. Her family was frightened, especially for the safety of her father who was also an anti-Taliban activist. However, they also thought that the Taliban, a fundamentalist group, wouldn’t actually harm a child.

On 9th October, 2012, when Malala was returning home in the school bus, the real face of Taliban was revealed. A man boarded the bus forcibly and demanded that Malala be identified. It was when her friends looked at Malala that she was given away.

The Taliban gunman fired on the left side of her head but the bullet somehow travelled down her neck. The incident also left two other girls injured. Malala was immediately taken to a medical hospital at Peshawar and a portion of her skull had to be removed to reduce the swelling of her brain.

Her condition was critical and she had to be transferred to Birmingham, England for further care. Malala required multiple surgeries including one to repair her facial nerve that would have otherwise paralyzed her left face. By March 2013, she started attending school at Birmingham.

In 2013, on her 16th birthday, Malala gave a speech at the United Nations and also began working on an autobiography titled “I Am Malala: The Girl who stood up for Education and Was Shot by the Taliban”. The autobiography was out by October 2013, but Malala still remains a target for the terrorist group.

Malala also received the Sakharov Prize for Freedom by the European Parliament in October 10, 2013 and was also nominated for the Nobel Peace Prize. It was in October 2014 that her Nobel nomination was accepted and she became the youngest winner in any category.

Malala’s ordeal and strength has made her a role model for young women everywhere. But it was her father’s beliefs that have shaped her life most. As Elizabeth Gilbert writes, he taught her to “unlearn the lesson of obedience and never clipped her wings.”