Book Excerpt From ‘Myself Meena IAS’ by Dakshita Das 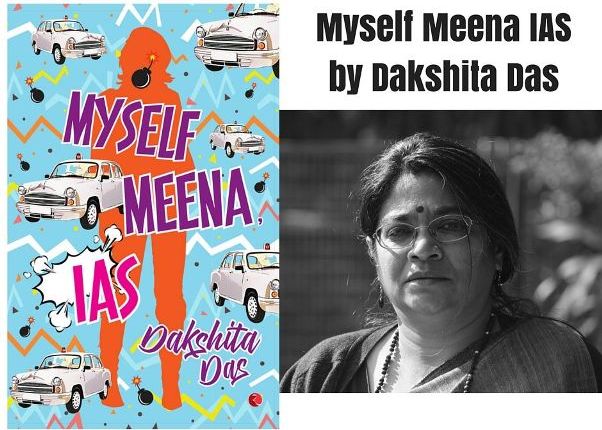 This is an excerpt from Dakshita Das’ new book, ‘Myself Meena IAS’ that tells the story of Meena, a young, attractive, fun-loving girl from Bareilly, who finds her life in a state of disarray.

My nana had once warned me about two types of pain in this world: physical pain that merely hurts, and an internal aching pain that changes you totally. He had also helpfully amplified that of all the pains in the world, it hurts the most when you land on your butt.

Of course, he used the Hindi word for butt, which made it sound worse. The day I joined work it was as though he was around me, his words prophetically resounding. I had walked into a disaster. Sheer unadulterated disaster. In short, I had landed hard on my butt!

But my narrative of disasters and upheavals doesn’t start at this job, it ends here. My tale started eons ago, when I was still an egg waiting to be fertilized. Along with Baba’s sperm, truckloads of his unfulfilled dreams and ambitions were jammed into my DNA.

I can well imagine Baba happily chortling at my birth ‘here is what I could not be!’ and hastily setting out to purchase encyclopedias and books and exam guides for me while other dads planned for diapers, baby milk and suchlike.

Other babies sucked at their teething rings while I was handed a cloth book to chew. Other toddlers played with toys while I was put in front of a computer which ran an educational programme designed for tots.

While other babies lay in their cots gurgling, I was put through what Baba termed ‘share the view’. He’d take me for long walks in a backpack, and narrate whatever he saw: ‘that’s a little dog’ or ‘look at those big trees!’ or ‘did you hear that car?’ All designed to give me endless vocabulary. This, in sum, was the general drift of my childhood.

Sweets were distributed in the neighbourhood the day I lisped my first sentence: ‘Myself Meena, IAS.’

Tears poured down Baba’s face even as he battled with my oh-so-wrong English, while my normally unemotional ma too looked weepy. Yes, my destiny was doubtless shaped in her womb.

By hindsight, while Baba gave me several inputs, the one on common sense was missing. Therefore, once unleashed into the big bad world to make choices, its absence combined with providence really freaked me out. Thus, the point at which I am right now can only be surmised as the last chapter of my story i.e., The End.

I entered my family at a time when Ma was harassed enough to not want another child. But for Baba it was a different story altogether. Inspired by the neighbourhood astrologer who forecast that things would change if Baba expanded his family, regardless of the child’s sex, he looked at his newborn daughter with tremendous enthusiasm. Accordingly, I was viewed as an out-of-the-ordinary child born with a special destiny.

‘I’ll ensure she becomes a sarkari officer’, was Baba’s earliest thought—sarkari job being the ultimate goal for the average resident of Bareilly, aka us. Maybe that aspiration got interminably intertwined with what he was undergoing in his life at that precise point in time.

In short, the district commissioner, his boss four times removed, was at his throat as the teeny tiny district health hospital Baba headed continually threw up death cases, one after the other. If it was malaria one day, then it was cholera the next, and then, lo and behold, chikungunya struck.

So he was sandwiched between patients, their grieving kin and the hopping-mad district administration. It was clear that his life’s ambition was that I grow up to bash up the world the way he was being bashed up! In a nutshell, Baba wanted power!

Given my so-called special destiny, I grew up totally spoiled and guided by Baba’s lenience, quite unlike my older sibling, Bhai; no housework for me while he was sent to fetch milk, buy vegetables and climb up the roof to release the air from our creaking water pipelines. I was expected to just study and perform well.

I went to a convent school with my better-off cousins. I wore their hand-me-downs, which was duly announced by them to all and sundry. Terribly humiliated early on in life, I tried making up for that with my good grades, which somewhat insulated me from their sneers and the mocking. You really can’t run down a prized student, can you?

Till the junior school, I was up on the stage year after year receiving prizes for excellence in academics. After each of my prize distribution ceremony, Baba would preen and strut like a peacock and advise others on how to bring up a brilliant child. ‘Arre, Bhai saheb,’ he’d tell his astrologer who had forecast my future, ‘you are simply a genius!’

But sadly, shortly after, somewhere in middle school, hormones struck and I changed tracks. I sprouted pimples and a bust and an intense attraction for boys. My motto switched to ‘You are young only once! If you follow all the rules, you’ll miss out on all the fun’.

Friends became more important than anything and, much to Ma’s irritation, the intensity of the giggles from my room when my friends came over knew no limits. She’d also frown at the eye shadow and mascara I tried to experiment with. As for nail polish, whereas it was a huge ‘no-no’ for her, I’d try and put on a colourless shade in sheer defiance. Naturally, my grades began to slip.

It was clear that things had gotten out of control when the Physics teacher wrote a note home that read, ‘the student lacks a scientific temperament’. I hid it from my parents. The big issue that loomed large in my life was how to tell Baba that I had completely lost the plot.

Luckily my parents never attended parent–teacher meetings. Baba felt they were an utter nuisance and also that star pupils needn’t have worried parents! But I could sense him getting all worked-up by the time I reached Class 9, as there were no more prizes. At best I got one for the three C’s, that is, courtesy, caring and compassion which was neither here nor there or because they didn’t include subjects. My academic downfall was as certain as death and taxes!

I had confided in Sunita, my best friend, ‘What to do, Sunni? Baba has dreams and I have no interest in Maths, Physics or Chemistry.’

‘Just take the Board Exams,’ Sunni advised. ‘We’re shifting to another system of grading from this year where we’ll be getting A’s and B’s instead of numbers and no one will know the difference. Chalo, my chacha’s son is waiting outside with his friend. We’ll go out for a drive. Such fun, na? It’s going to rain and a drive in the rain is really romantic.’

‘Come, yaar,’ she insisted. ‘You know that he has the hots for you.’

So it was bye-bye to tuitions, hello to lots of mooning in the rain and a permanent farewell to calculus which I never ever understood thereafter. After classes, Sunni and I’d be out of the school running into the waiting car.

Her cousin would take us for long drives and, sometimes, movies which I’d otherwise never get permission from home to see. Nothing as such which can be termed promiscuous but fairly off the line and totally out of the syllabus as set for me by Baba.

My feeling of hopelessness and anxiety increased as the Class 10 Boards came closer. I just couldn’t understand a thing. Even Hindi and English were torturous. All that poetry in Braj bhasha and Shakespeare in English. Lousy!

Worse still, the wicked girls in class had nicknamed me Alfa Romeo after the famous sports car. I could be found running away from books and into the arms of Sunni’s cousin faster that you could blink.

It helped that we lived in a huge dilapidated bungalow for medical officers, which had a broken down back entrance. I’d leave the lamp on at night and slip away leaving Baba to think that his brilliant daughter was neck-deep in the world of academics while I partied like there was no tomorrow.

Close to the exams, it was Sunni’s cousin who came to our rescue.

So guide books became my new teacher. Terrified of disappointing Baba, I blocked hormones and doggedly tried to study. I had missed out a complete cycle of study and frankly didn’t like a single subject. I turned for sympathy to Ma, an otherwise hazy figure in my life, who seemed to be merely cooking and washing.

‘Ma, I don’t like any subject…,’ I hesitantly started.

‘Tell that to your Baba,’ was the terse rejoinder. ‘He has filled your head with all this nonsense of becoming an officer. Who’ll marry you once you cross the age? And just look at you? You don’t know how to cook or run a house and I suspect that the light you have on in the room at night is only pretence.’

Ouch! Ma seemed to know more than I thought. So, no looking for sympathy or a solution to my crisis there.

The boards loomed large but guess what! I was saved by totally unplanned circumstances. Nana fell ill and my mother’s brothers discovered us all over again so that he could be shifted to our house and Baba could oversee his treatment.

Baba was gloomy while Ma was happy to have her father home. I needed to give up my room for Nana; naturally that would harm my studies. And yes, it happily did!

The papers were a haze in front of my eyes. Maths was a killer but someone had told us (was it the class teacher?) that you get numbers for the working as well, so I was hopeful of passing but not really of performing. True to expectations, the results were disappointing.

Baba blamed Ma and couldn’t say so because he didn’t want her angry. Ma, however, was smarter. She knew that he would blame her father’s illness for my poor performance and happily regaled him with what I’d been up to in the last few months.

The aunty who lived next door spilled the beans on me (why on earth was she keeping tabs on our house at late hours beats me). Ma had also got to know about Sunni’s cousin and threatened me with dire consequences if I didn’t begin housework.

But it was tragic for Baba. He behaved like someone out of a Meena Kumari film: Baba neither shouted nor raged, he just looked broken, so utterly broken. I was ashamed. His dreams of watching me become an engineer with an MBA degree and then as an IAS (Indian Administrative Service) officer lay in shreds.

This extract from Myself Meena IAS by Dakshita Das has been published with permission from Rupa Publications.