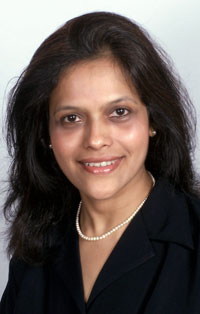 Mumbai-based entrepreneur, Priti Shroff, overcame the tragedy of her sister’s fight with breast cancer to take the knowledge and practices of alternative therapy to the masses.

Every person has a different way of coping with a personal tragedy. Most people just mourn through a tragic phase in their lives whereas just a handful spiritually enrich themselves from a tragedy and go on to help others from what they’ve learnt from it.

Mumbai-based alternative healer, Priti Shroff, is one of the rare few who decided to spread the unique knowledge she gained while helping her sister, Tanvi Mayani, in her fight with breast cancer.

Priti had worked as a career counsellor, nursery teacher and stock broker -actually enjoying all these professions till she embarked on a new journey by inaugurating Prisim, a healing institute of wellness of mind, body and spirit, in February 2005.

Though Priti always had an innate interest in spirituality, it was while accompanying her terminally ill sister through a course on Raw and Living foods pioneered by Dr. Ann Wigmore in Atlanta, USA that she got deeply involved in matters concerning holistic health.

Tanvi’s chemotherapy and radiation sessions had taken the toll on her by leaving her with a huge stomach and a hunched back.

To help Tanvi heal the ravages of cancer Priti flew her sister to Atlanta to enrol her in Wigmore’s living food lifestyle programme, providing a unique regime of detoxification, nutrition and rejuvenation through the use of fresh raw fruits, vegetables, juices, nuts, sprouted seeds, grains, wheatgrass juice and chlorophyll rich greens and beans.

Within ten days Tanvi was back to her slim figure of a flat tummy and straight back which she could proudly flaunt in a mini skirt. Her fitness level in fact made her well enough to fly a private plane and swim with the dolphins at ease.

Tanvi was in good health for six months without chemotherapy and radiation but unfortunately suffered from a cancer relapse in the spine on the shock of hearing that her brother had met with an accident and was in critical condition.

She passed away in December 2004 but the diet of raw and living food she continued with did help her immensely even in the final stages of cancer.

Tanvi’s demise was of epiphanic awakening to Priti. “I went through this inner search. I just couldn’t come back to stock broking anymore as I knew that God wanted me to do something much bigger.”

Deeply introspecting into her sister’s tryst with cancer, Priti realized that not all cancer patients in India were lucky enough to travel as far as Atlanta to enrol in the extremely expensive Raw & Living Foods course.

With all the knowledge Priti had learnt in true honesty from Wigmore’s course, Priti decided to impart the very same knowledge in India at rates affordable to Indians.

Priti had already started helping cancer patients with Raw and Living Foods prepared by her while her sister had been suffering from cancer, the results of which were very impressive.

Patients, who were given just a few weeks to live, pulled through for months on being put on Priti’s prescribed diet.

When Priti told her husband of her wish to start a holistic health centre on the lines of Ann Wigmore’s course, he had his doubts as he felt that Priti was good while working under a boss but entrepreneurship was really not on the cards for her.

But Priti optimistically felt, “God will show me the way.” Call it mere coincidence or divine intervention, Priti’s long lost school and college friends who were into holistic healing contacted her and expressed a genuine interest to be a part of Priti’s healing programme.

Priti’s classmate from Jai Hind College, Sherina Tanwani, who had studied up to high levels in System Brahma Satya and adept at conducting healing meditations and training people in the art of energy healing, agreed to be an aura healer and conduct Brahma Satya Energy workshops for Priti.

Priti’s family friend, Vivek Chhabria, who had a diploma in acupuncture from the Indian Academy of Acupuncture Science, joined Prisim too.

Retired Brigadier Chainani, of the National School of Blind, whose students had been trained as wheat grass therapists by Priti, offered his students to be trained as holistic masseurs by Priti.

Prasanna Murthy (whom Priti knew through Brigadier Chainani) professionally trained in massage therapy and Ayurveda joined as a practising doctor of naturopathy and a massage therapist.

Jyotika Shroff, Priti’s sister-in-law, who also lost her sister to cancer, is the Raw & Living Foods recipes teacher on being taught the same by Yogini Unmani, an international raw foods and yoga teacher based in Miami.

Prisim came into being on February 6, 2006 with this team of dedicated holistic practitioners. The significance of Prisim’s name lies in the pyramidal structure of a prism which concentrates all energies at a single point.

In Priti’s institute, it is the concentration of alternative systems to culminate in the healing of an individual. The extra ‘i’ in ‘Prisim’ is to indicate the individual to heal for whom the cream of various systems is brought together.

Actor Dimple Kapadia, a client of Prisim says, “I have been closely associated with Prisim Healing Institute using their aromatherapy products, ozonizer, wheatgrass juice etc. Its uniqueness is that all the alternative therapies are being offered under one roof. As a believer of holistic health, I would urge you to take advantage of this opportunity. A total detoxification and rejuvenation course is a lifetime opportunity for every individual who wants to regain and maintain complete health and happiness.”

When asked about the future plans of Prisim, Priti answers, “In near future I want to spread holistic awareness among children. I want to help children de-stress through yoga and express emotions through painting workshops. I want to make them aware of the harmfulness of pastas, pizzas, aerated drinks and junk food which is unfortunately the “in food” of the teen generation and encourage them to include Raw and Living Foods in their diet instead.”