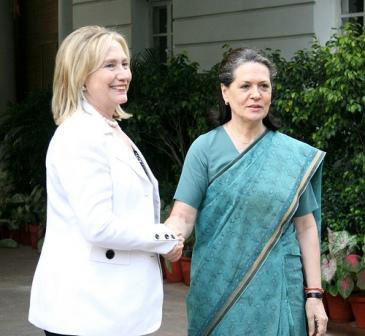 Recently voted #7 on the Forbes List of the World’s Most Powerful Women, Sonia Gandhi has emerged as a powerful woman leader and is currently the President of the Indian National Congress and Chairperson of the ruling United Progressive Alliance (UPA).

In 2007 she was named the 3rd most powerful woman in the world by Forbes magazine and also featured in Times Magazine’s list of The 100 Most Influential People In The World in 2008.

Sonia Gandhi was elected for the fourth time as the Congress president and with this she holds the record of the longest serving party president. She is also the first person of foreign origin to become President of the Congress Party since India attained independence.

A Dignified Widow In A Foreign Land

Sonia Gandhi stayed away from politics and devoted herself to bringing up her children for seven years after her husband’s assassination in 1991. The party pleaded with her to join on several occasions but she declined.

It was in January 1998 that she joined the party and contested the Lok Sabha elections. She emerged as a saviour who helped the Congress party regain its fading glory when it was facing turbulent times and a crisis of leadership.

As a woman born and brought up in a foreign land, she has gracefully adopted Indian culture and is now an indisputable leader and the face of Indian politics.

Despite becoming the target of constant criticism and attempts to humiliate her as a result of her Italian origins, she remained calm and composed in the face of political opposition and emerged as a winner.

Mrs Gandhi seldom makes appearances in the media and is known for a persona dignified by silence. She has travelled throughout the country, delivered speeches and has won the unwavering support of the masses through her election rallies.

Leading The Congress Party To Power

Sonia Gandhi led the Congress party to power at the centre in 2004 when she launched a nationwide campaign focusing on the Aam Aadmi (Common Man) which brought her party victory against the BJP led National Democratic Alliance (NDA), in the 2004 general elections.

The elected members of the Indian National Congress and the allied parties pleaded with Mrs Gandhi to accept the post of Prime Minister.

Following days of political drama, she declined the nomination, and decided to continue in her capacity as the party leader, leaving many of the BJP party members who had opposed her with egg on their faces.

With the masterful stroke of opting out of the Prime Ministerial race and handing over the post to Dr. Manmohan Singh, Mrs Gandhi put to rest the controversy surrounding her Italian origins.

While she decided not to be in the forefront of the political scenario, choosing instead to continue working in the background, she remains a powerful influence on party decisions till date.

A Force For Women’s Empowerment In India

She played an important role in passing the National Rural Employment Guarantee Scheme and Right To Information Act as a law, when she was the Chairperson of the National Advisory Committee.

This landmark act is aimed at ensuring transparency in the system and entitles every citizen by law to ask questions and expect answers from the government.

From her humble origins in Italy, to one of the most powerful politicians in the world’s largest democracy, Sonia Gandhi has overcome the chauvinism and xenophobia of Indian politics and emerged as a charismatic woman leader in India.

Under her influential leadership, the Congress party has been able to reach out to the poorest Indians and change the face of the Indian economy.

Are you glad Sonia Gandhi stayed in politics? Tell us what you think in the comments below.