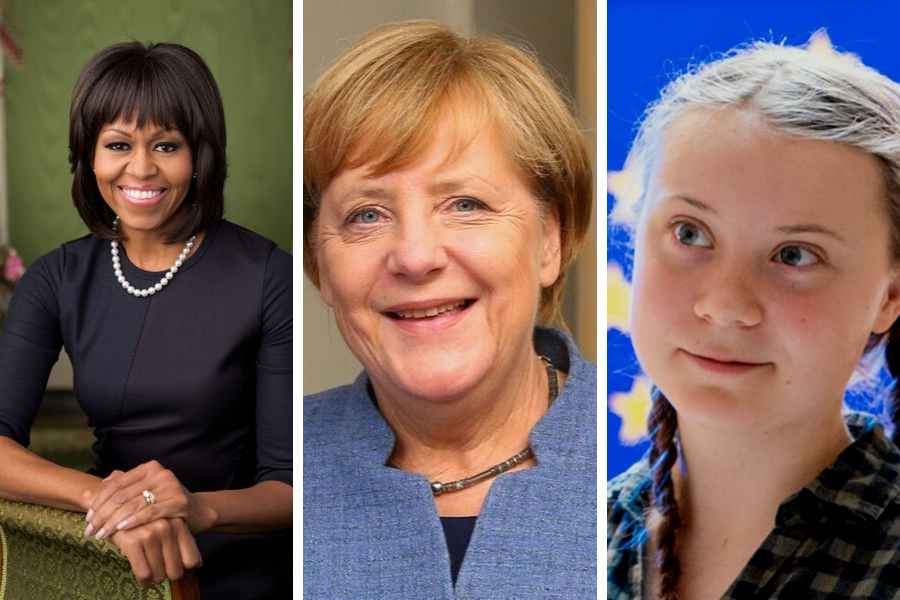 Our list of the most powerful women leaders changing the world reflects what global leaders should be like, and the amazing feats that women are capable of.

What does it mean to be powerful? What does it feel like to have a massive influence on the world? All women leaders have had to overcome challenges to reach their goals.

Forget about the fast lane. If you really want to fly, just harness your power to your passion. ~ Oprah Winfrey
Click To Tweet

Just like coal under pressure turns into a diamond, these challenges reshape and transform them into amazing role models. Let us learn more about some powerful women leaders, who shaped the world into what it is today.

The Most Powerful Women Leaders Changing The World

Our list of the most powerful women leaders changing the world reflects what global leaders should be like, and the amazing feats that women are capable of.

Each year, Angela Merkel tops the list of most powerful women. And not many could compete with the 60-year old German leader when it comes to political experience.

A former research scientist with a doctorate in physical chemistry, Merkel has clinched her third four-year term as German Chancellor thanks to her proactive role in governing her country. This makes her the longest-serving elected EU head of state.

She has a fierce stance against Russia on Ukraine, this being only one of the demonstrations of her political will. She also provided military assistance to Kurds in order to counter ISIS.

Merkel is not just influential; she is one of the people who shape the world’s political landscape.

Melinda French Gates is the ex-wife of Bill Gates. But beyond that, she is an American philanthropist, a former Microsoft project manager, and the co-founder of the Bill and Melinda Gates Foundation.

Gates uses her influence in order to directly aid people she thinks can really make a difference in the world. By giving grants and other forms of support, Melinda Gates helps develop the future of technology, and international development.

In fact, her philanthropic activities have cost her approximately $3.4 billion, $26 million of which is for providing the aforementioned grants.

For her services, Gates was appointed an honorary Dame Commander of the Order of the British Empire, back in 2013. She was also honoured with the Presidential Medal of Freedom by former US President Barack Obama in 2016.

Gates provides an example of how influential people can use their power to affect and change the lives of others for the better.

These days, who still don’t have Facebook? This globally-used social networking site is currently under the direction of COO Sheryl Sandberg.

Sandberg was a former Google executive, who was brought on board by Facebook creator Mark Zuckerberg, back in 2007.

Now she oversees marketing, business development, sales, human resources, and communications. She also happens to be a significant shareholder.

Beyond the website, Sandberg has displayed a commitment to serving others. With The Giving Pledge, she promised to give away half of her net worth to charity.

Hilary Clinton is among the most powerful politicians in the United States and has consistently landed spots on similar lists year after year.

Even with her recent loss during the 2016 presidential elections, she remains a remarkable presence, particularly for the Democratic Party.

Clinton has been through everything: she has served as the First Lady of the United States, as a US Senator, and as US Secretary of State. Throughout her political career, she has fought for gender equality and health care reform.

She came close to becoming the president after winning a plurality of the national popular vote. However, she lost the Electoral College to Republican nominee Donald Trump.

With all her political experience, it’s no surprise that Clinton is among the most powerful women. Having held on to so many different political positions, Clinton has become an inspiration for girls all over the world who aspire to become leaders.

Christine Lagarde has been the managing director of the International Monetary Fund (IMF) since 2011.

Before this, she served as the Finance Minister of France. This is a post that she held onto for an entire six-year term.

Jacinda Ardern is the 40th Prime Minister of New Zealand and leader of the Labour Party. She has distinguished herself as one of the leaders who responded swiftly and effectively to the COVID-19 outbreak in New Zealand.

Her communication style has been described as a “masterclass in crisis communication,” and she has been commended for addressing both the human and economic consequences of the coronavirus pandemic. She is also New Zealand’s first prime minister to be pregnant in office.

An American lawyer and writer, and the only African-American ‘First Lady’ of the United States, Michelle Obama also happens to be one of the most powerful women leaders in the world.

She held this position from 2009 to 2017, during which she gained the favour of the masses. In fact, she has a higher approval rating compared to her husband. She had an approval rating of 66 per cent, whereas Barack Obama had a rating of 44 per cent.

Though her husband has completed his term as US President, Michelle Obama remains an influential presence because of her philanthropic work and social awareness campaigns.

Mrs Obama is a well-liked leader who has been on the frontlines of the fight against obesity – a perennial problem in the US. She is currently dedicated to empowering America’s youth by improving the educational opportunities available to them.

Janet Yellen is an American economist who now serves as the Chair of the Board of Governors of the Federal Reserve System. Before this, she served as Vice-Chair from 2010 to 2014.

She was also the President and Chief Executive Officer of the Federal Reserve Bank of San Francisco.

Under President Bill Clinton, she was the Chair of the White House Council of Economic Advisers. She was also a business professor at the University of California Berkeley, Haas School of Business.

Holding control over the most influential central bank in the world, Yellen holds a huge responsibility that only a truly capable leader could take care of.

Mary Barra is the first female CEO of a major global automaker, currently serving as the Chief Executive Officer and Chairperson of the General Motors Company.

Her calm and confident persona helped the company bounce back after a 30-million-car recall due to faulty ignition switches.

Everyone has used YouTube, but does everyone know the current CEO of YouTube is a Polish-American woman named Susan Wojcicki?

Wojcicki helped revamp the video-sharing site’s strategy upon being acquired by Google for $1.65 billion.

A socially impactful media executive, philanthropist, motivational author, speaker, and talk show host, she is a household name for Americans, as well as the rest of the world.

In fact, she was considered the richest African-American woman of the 20th century.  A multibillionaire philanthropist and one of the most powerful women in the world, she is a highly influential personality, who works for the people through different channels.

Even Barrack Obama thought of her as ‘may be the most influential woman in the country’.

Greta Thunberg is only sixteen, and that makes it all the more remarkable how this young woman initiated a youth-led climate strike in August 2018 outside the Parliament building in Sweden.

That year, Europe broke all records of environmental crises with extreme heatwaves and forest fires breaking in Sweden.

After her weekly protests inspired student strikes in more than 100 cities worldwide, Greta, who has Asperger’s Syndrome, has become the figurehead of a movement of youth climate activists.

She gave a speech at the People’s Climate March Rally in Sweden and said in an interview that she will not stop fighting for what she is passionate about. To prove her commitment she sailed across the Atlantic on a zero-emissions yacht for the UN climate summit.

She is currently leading a global climate strike in 150 countries, which is being covered on every TV channel and extensively shared on social media.

These women are powerful, not merely because of their influence, but because of how they lead from the front and wield their power responsibly and intelligently for the greater good.

Joe Mosier is a car enthusiast and loves working on his 2011 Mercedes Benz 300 C-Class. Other than that, he loves to cook and spend time with his family. In his free time, he writes about cars on Adsitco’s blog and shares them with his readers.