From Recurrent Miscarriage To Successful Pregnancy With IVF 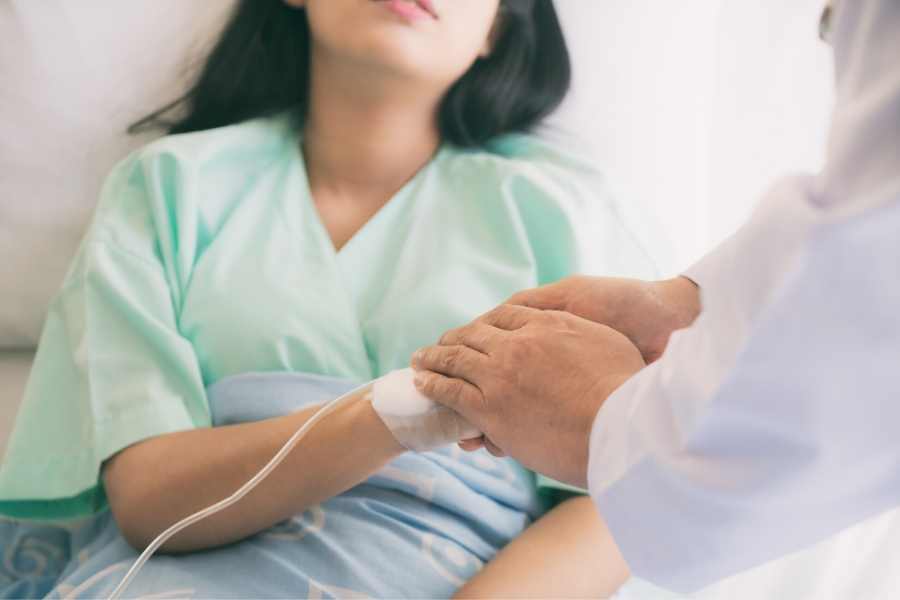 Multiple miscarriages can be devastating for a couple trying to conceive. But even after recurrent miscarriage, successful pregnancy can become a reality.

Natasha and Rohan started a new life after their perfect fairytale wedding. Both busy in their careers, they were constantly riding high on success. With everything going on, family planning was the last thing on their minds.

Five years after into their marriage, they decided to take the plunge and finally start planning. They went to preconception appointments and got a clean chit from their clinician.

They started taking all the right prenatal vitamins and started trying for the baby. Since everything looked great, getting pregnant was not difficult for Natasha. But little did they know that their happiness was not ever-lasting.

Natasha had her first miscarriage 7 weeks into the pregnancy and was devastated. It was a difficult time for the couple. Over the next four years, Natasha conceived three more times, but every pregnancy ended in a miscarriage.

Both of them were struggling with the emotional trauma and were severely anguished from the repeated miscarriage diagnosis. Initially, after the first two miscarriages, her doctor told her that she belongs to just 5 per cent of women experiencing two early miscarriages in a row.

And that’s when Natasha visited Gynaecworld for recurrent miscarriage testing. She was diagnosed with a condition called recurrent pregnancy loss (RPL) or habitual abortion defined as the loss of two or more clinical pregnancies.

What Is Recurrent Pregnancy Loss (RPL)?

RPL is a complex condition with multiple causative factors, affecting around 2-5% of couples. Primary RPL is defined as multiple losses with no viable infants.

And tertiary RPL is defined as multiple miscarriages between normal pregnancies. Whether primary, secondary or tertiary, RPL for any couple shatters the hopes and plans invested in that baby.

So what led to Natasha’s multiple miscarriages? After a thorough recurrent pregnancy loss workup, the cause of chromosomal abnormality was ruled out. Let us discuss what can lead to RPL.

So what causes miscarriage and what can cause early miscarriage, in particular? There a number of reasons for multiple miscarriages and causes of recurrent pregnancy loss (RPL) that can be diagnosed during recurrent miscarriage testing.

Here’s a list of reasons for early miscarriages that your recurrent miscarriage specialist will want to test for.

One of the reasons for multiple early miscarriages could be that either parent may be genetically predisposed to passing on an abnormality to the baby.

A study reports that 50 to 60% of all pregnancy loss in the first three months of pregnancy are miscarriage due to chromosomal abnormalities.

The most common abnormality is translocation (when sections of two chromosomes have switched places). Translocations can be completely harmless (balanced) or they can cause serious health problems, depending on the circumstances.

Advanced age is a leading cause of miscarriage and the association between age and RPL has always been justified.

Studies have shown that female age of more than 35 years was found to double the risk of miscarriage compared to women less than 35 years. The losses climb to almost 50% after the age of 40!

Miscarriage can also occur when the uterine lining does not develop sufficiently leading to a suboptimal environment for implantation and nourishment.

Women with PCOS usually suffer from insulin resistance and high LH levels. Both these causes have been suggested to cause miscarriages.

Structural problems or distorted shape of the uterus occurs in almost 19 per cent of women. These malformations can either be present since birth or may be acquired later.

Conditions like double uterus, septum in the uterus or a uterus in which only one side has developed are all examples of congenital malformations which may cause miscarriage, usually by interfering with the implantation of the fertilized egg.

Uterine fibroids or polyps can cause infertility if they are blocking the opening of the fallopian tube or if their position is affecting the normal development of the uterine lining.

A septum, (fibrous tissue which divides the uterine cavity), can also cause poor implantation and thus pregnancy loss. Intrauterine adhesions (scarred tissue) are also a major cause of miscarriages, usually seen in patients post a D & C procedure for prior abortions.

Another cause of miscarriage in the second trimester is an “incompetent cervix”, meaning the cervical muscle is weak and hence cannot remain closed as the fetus grows, leading to the premature opening of the cervix and thus miscarriages.

Approximately 15% of couples with RPL are diagnosed with a blood clotting disorder causing miscarriage. This may be related to circulating antibodies that interfere with the proper functioning of the placenta.

This may be caused by antiphospholipid antibodies, which are important components of the membrane that surround the blood vessels. Usually, these antibodies are acquired and are not present since birth.

Also, a mother’s immune system is altered during pregnancy so that the fetus is not rejected by her body and is allowed to grow. When this balance gets disturbed, the immune system may become the cause of multiple miscarriages.

Certain congenital factors which tend to cause blood clots (thrombosis) in the placental circulation have also been known to cause RPL in the second half of pregnancy.

Some studies show that women having a BMI of more than 30 tend to have miscarriages. Obesity also leads to obstetric complications.

Gradual weight loss through a healthy lifestyle has been shown to be instrumental for quicker conception as well.

Based on a few studies, certain environmental factors like heavy metals, pesticides and plastics can play a role in RPL.

Men too can contribute to RPL. Increased age, smoking, obesity, excessive exercise can cause sperm DNA damage and lead to pregnancy losses.

Almost 50% of women with unexplained recurrent pregnancy loss have no specific cause identified. Many studies, however, have shown that with continued attempts at conception and no particular treatment, the chances for a future baby are quite promising in such couples.

Depending on the woman’s age, the chances for a live-birth in subsequent pregnancies are as good as 50% to 80%!

What Tests Does A Recurrent Pregnancy Loss Workup Include?

What investigations for recurrent miscarriage can you do to detect the cause of unexplained recurrent pregnancy loss?

A thorough recurrent pregnancy loss workup of the couple and a judicious approach to finding the causes for repeated miscarriages can help the couple achieve a successful pregnancy.

About 1/3rd of recurrent pregnancy loss cases are caused by a parental chromosomal abnormality. A medical and a familial history will help your miscarriage specialist rule out any genetic factor for RPL.

It is recommended to do parental genetic testing or karyotyping to detect any genetic disorder. Nowadays, karyotyping can be done using newer and more efficient techniques which analyses the entire sequence of the genome.

Genetic counselling helps the couple rule out genetic defects as the reasons for multiple miscarriages and helps them plan the way forward for the next pregnancy.  Genetic testing of the fetal tissue material post-miscarriage can also help in determining any abnormality.

A 3D ultrasonography goes a long way in the evaluation of the uterine cavity. Also, an HSG or a hysterosalpingogram is done to determine the shape and size of the uterus and to rule out possible scarring in the uterus, polyps, fibroids or a septal wall, which could affect implantation.

If there is a specific concern about the uterine cavity, a hysteroscopy (examination done under short anaesthesia to get a direct visual of the cavity) can be done to rule out any adhesions or abnormality that can cause recurrent miscarriage.

To check for immunologic responses that can cause pregnancy loss, your miscarriage specialist will recommend specific miscarriage immune system blood tests as part of the advanced evaluation, depending on the causes of repeated miscarriages.

A blood test for progesterone levels is done on cycle day 21 to determine if the levels of progesterone in the body are sufficient enough to support the pregnancy.

Certain unproven tests and treatments are also advised for RPL. These include the use of immunoglobulins, steroids and antibodies directed against paternal cells. But due to inconclusive evidence on their use, these treatments do not guarantee a pregnancy.

Among miscarriages treatment options, preimplantation genetic diagnosis (PGD) and IVF for recurrent miscarriage are the most popular and successful.

In the case of Natasha and Rohan, a chromosomal abnormality was found to be the cause of her abortions. Hence the couple was advised PGD (preimplantation genetic diagnosis) – a new term used for genetic embryo testing – as part of their recurrent miscarriage treatment protocol.

When the genetic defect is already known, the process is called PGD. However, when no abnormality is identified in patients, a comprehensive screening of the embryos is done to find out which ones are absolutely normal to be implanted into the uterus.

This is called PGS (preimplantation genetic screening). This treatment for recurrent pregnancy loss involves the use of IVF or test-tube baby, wherein the woman’s ovaries are stimulated to produce eggs with the help of certain injections.

These eggs are then mixed with the husband’s sperms to form the embryo. A very small amount of DNA material is taken from these embryos and then tested for any genetic abnormalities.

Today, even if you have had over 3 miscarriages in a row, there’s no reason to be depressed and lose heart, because a successful pregnancy is truly possible even after multiple miscarriages.

Multiple early miscarriages can be extremely difficult for a couple, and unexplained recurrent pregnancy loss leaves so many questions left unanswered, and so many things never said.

Dr Duru Shah is Director, Gynaecworld, the Center for Women’s Health & Fertility in Mumbai, India and a prominent and well-known gynaecologist in India. She is not only known to be one of the best gynaecologists, but also a prominent social activist.

Through her profession, she has contributed towards the girl child and rural women in society. She is the voice of the gynaecological community for propagating the best practices in her field and championing multiple social causes pertaining to women’s health.

A consultant to Breach Candy Hospital and Jaslok Hospital, even at the age of 70, Dr Shah is intrinsically engaged in setting new benchmarks in her profession and unflinchingly lends support to an array of social causes through various professional and social organisations.

For fertility counselling and information about fertility treatment in India, contact her fertility center in Mumbai. Book your appointment with Gynaecworld at Kemps Corner, Mumbai. Call: +91-22-23802584 | Email: durushah@gmail.com