The Top 5 Sports Women Of India Who Made It Big 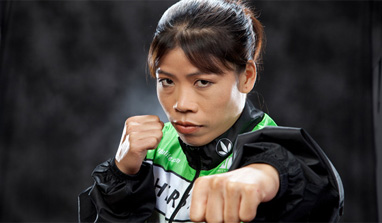 There was a time when Indian women and sports did not seem to go hand in hand. All of that has changed. Now Indian women are taking the athletics world by storm, with fierce determination, grit and awe-inspiring passion.

These five women, each in their own way, broke down barriers and weren’t afraid to grab hold of their dreams and in doing so have brought pride to India and inspiration to women all over the world.

On 23 May 1984, Bachendri Pal made history for Indian women, being the first ever to summit Mount Everest, and the fifth woman in the world. This was India’s fourth expedition to Mount Everest and the group was comprised of six Indian women and 11 men.

During the ascent, a serac on the glacier situated above their camp slid down, causing much damage to the camp and injuries to the members of the group.

This left many members unsettled, some chose to return to base camp, but not Bachendri Pal.

Even though she’d suffered an injury to her head, she kept climbing towards her goal. “At that time,” she says, “I really realized that women have that power, the tolerance, the patience – what we call this women power – to keep going.”

Being the only woman now left in the group, she reached the top of the summit on 23 May 1984, and hasn’t stopped there.

In 1985, Bachendri led an Indo-Nepalese Everest Expedition team comprised of only women, which created seven world records and changed the face of Indian mountaineering.

Bachendri then went on to work for Tata Steel Adventure Foundation for Tata Group, where she is Chief of Adventure Programs.

This courageous woman, who comes from the small village of Nakuri in Garhwal, has received numerous awards and recognition throughout her mountaineering career. She has gone on to train and empower many women throughout her life.

If you’ve ever heard references to the Queen of Indian Track and Field or the Payyoli Express, then you’ve heard of P.T. Usha. Born in the village of Payyoli, Kozhikode District, Kerala, she is arguably one of India’s greatest athletes.

When she was 12, the Kerala State Government began a Sports Division for Women at Kannur, and she was one of 40 girls to start training under coach O.M. Nambiar.

P.T. started making waves and winning medals in the track and field world in the early 1980’s, specifically at the 1984 Los Angeles Olympic games.

Here she finished first in the semi-finals of the 400 meter hurdles but faltered in the finals, losing the Bronze by only 1/100th of a second.

Despite this loss, she still made history as being the first Indian woman to reach the Finals in the Olympic Games. This was only the beginning for P.T. Usha.

In 1985, she set a World Record, taking home 5 gold medals from the Asian Track and Field Meet at Jakarta, Indonesia, to date the most gold medals earned by a female in a single track meet.

She continued to win countless medals and awards and was named Sportsperson of the Century and Sports Woman of the Millennium by the Indian Olympic Association.

P.T. went on to open her own school in 2002 called the Usha School of Athletics, training young athletes to do as she has done, simply, to be great!

Initially, Mary’s sports career began in order to help provide financial support to her family, living in Manipur. Mary began her boxing career in 2000, inspired by Dingko Singh, who was also from Manipur, when he came home with a gold medal from the Asian Games.

She was a quick learner, found that she had a natural gift for boxing, and wasn’t scared of training like one of the boys. In September of 2004, Mary told the Deccan Herald that at first her father was furious with her for taking to boxing.

He said that she should not expect to get married with a battered and bruised face. Mary told the Herald that her cousins were very supportive though and coaxed her father into giving his nod.

She won her first title and Best Boxer at the First State Level Invitation women’s boxing championship in Manipur in 2000. Mary then went on to win the gold at the Seventh East India’s Women’s Boxing Championship in West Bengal and continued to win at the Indian National Championships from 2000 to 2005.

That was just the beginning of her winning streak! Mary Kom has taken home many international gold medals and honors. One of her biggest achievements came at a ceremony in 2003 when she was the first woman ever to be awarded the esteemed Arjuna award for her achievements in boxing.

Mary is now a wife and mother of twin sons but her boxing dreams are still very much alive. Much to her amazing success, for the first time ever women’s boxing will be included in the London 2012 Olympics, where Mary hopes to win her first Olympic gold.

This young badminton player is currently ranked number 6 in the world by the Badminton World Federation. On March 17, 1990, Saina’s first championship win was at the Czechoslovakia Junior Open in 2003.

Saina has paved the way for many firsts in the world of badminton for India, including being the first Indian woman to reach the singles quarterfinals at the Olympics and first Indian to win the World Junior Badminton Championships.

In 2009, she made history once again by becoming the first Indian to win a Super Series Championship, the most prominent badminton series in the world, at the Indonesia Open.

Saina was first encouraged to play badminton by her father and mother, who were also badminton champions in Haryana. She started at the young age of 8 and quickly went on to win titles on national and international levels.

Saina is training for her chance to win a gold medal at the London 2012 Olympics. At only 21 years of age, Saina is already India’s top badminton player, an amazing feat on it’s own, and it looks like she’s not going to stop there!

A Super Mom, discus throwing champion, is one way to describe this young woman. After a gap of 52 years, Krishna won a gold for India in Athletics at the 2010 Commonwealth Games.

Krishna was born in Agroha, Hisar District of Haryana, and is married with one son. Her husband, Virender Singh Poonia, is also her coach and has supported her throughout her training.

Krishna won a bronze medal at the Dosha Asian Games in 2006 and contested to reach the finals in the 2008 Beijing Olympics Games but finished 10th. Everything changed for her at the 2010 Commonwealth Games.

Krishna has made many sacrifices to reach her goals, such as being separated from her son for long periods of time to train in the United States. When she won the gold medal at the Commonwealth Games, her son Lakshaya Raj was there to see his mom’s victory.

He later wore the medal around his neck with pride. Krishna will continue to train with the support of her husband, Virender, as she goes for gold at the London 2012 Olympics.

Each of these women has been successful in a different sport, but they all have so much in common. They aren’t afraid to take risks, to do what others tell them they can’t do, to work hard and make the sacrifices necessary to get to their goals.

Each one of them has struggled along the way and continues to do so, knowing that they can always go a little bit further. These Indian women are an example to the rest of the women in the world; be fearless, dream big, break the rules, live your life now!