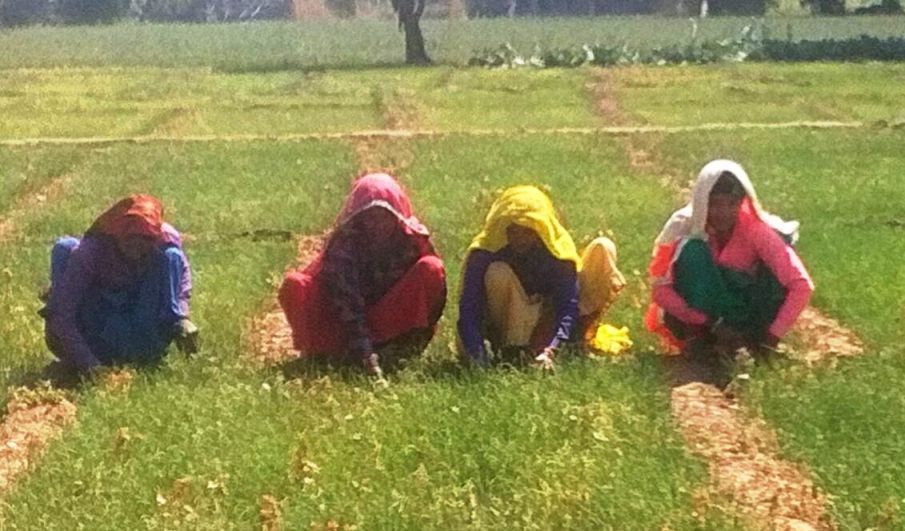 ‘Jagrukta’ or awareness is a vital component for the initiation of change and/or development.

Suman is twenty-six years old, resides in the village of Sahori, and is a farmer by occupation for almost a decade. She excitedly talks about the changes the initiative has brought about in her life: “Post the soil-testing, we were provided with the required type and quantity of fertilizer, based on the type of soil of our field, and the crop; the subsequent increase in the yield of onion helped us reap good profits, which were used to enhance the general quality of life of my family.”

Suman hopes for the initiative to continue so that more women benefit from the same. From her side, she spreads the word where she can, so that village women are encouraged to come forward, and benefit from ‘Jagruk Krishak’.

Saroj has been practising agriculture for about eight years now. She hails from the same village as Suman. She commends the introduction to solar spray pumps for spraying medicines and fertilizers, rather than the conventional way, which was painful for the hands and shoulders.

“It all started with one meeting held by the foundation; during this session, women were encouraged to form groups, buy a solar spray pump collectively, and also use the same as a group, as per a timetable, allowing time for everyone to conveniently use the same. Now, we do not need to depend on the men of the house to help us, as the solar spray pump is easy to recharge, environment-friendly, and friendly to use too. Such initiatives also encourage ‘women farmers’ to come together, share inputs and feedbacks.”

Savitri, from Jatiyana village, could not agree more with Saroj. She says that spraying medicines prior to the introduction of the solar spray pump was a tedious process, most of the times resulting in blisters on the hands and pain in the shoulders due to which she was unable to perform household chores properly. Besides this, not worrying about the availability of electricity, as the tank is solar energy operated, is a big relief, she adds.

“Sehgal Foundation visited our village Jaityana some three years back. We were told about the use of soil-testing, the important of the use of the right type and quantity of fertilizers, as per the quality of the soil, and the correct way of applying the same to our fields. On the ‘demo’ portion of the field, I recorded a thirty per cent increase in yield, with which I was very happy. I have been farming for almost twenty years now, and this is the first time I recorded this kind of a yield. It helped boost my confidence manifold, as I realized that I was capable of generating more profits from my land,” says Bhagawati, with a sense of pride in her voice.

Missar, aged fifty-five years old, who resides in village Thekda, commends the initiative not only because it has helped reap a profit of about twenty-thousand rupees by just the application of the right kind of fertilizer and seeds, but also because it has helped her prove her mettle as a farmer. This has placed her in a position where she can advise other women, and enjoy the goodwill generated from the benefits reaped by her ‘peers’.

“The foundation encouraged us to experiment on 0.5 bighas of land with fertilizers suggested post a soil-testing; this section served as a demo plot in comparison to the 0.5 bighas of our land, where we continued to farm as per our traditional methods. The ‘demo’ plot gave us a profit of approximately eighteen thousand rupees,” says twenty-eight-year-old Lalita from the village of Ulheri, who eagerly propagates the word about the initiative.

Rakhi, who hails from the same village as Lalita, is happy with ‘Jagruk Krishak’ too as it has helped her provide a better education for her kids; she adds that the since the benefit is there for all to see and gauge, other women should avail of this too, in order to enhance their lives, and the lives of their families.

Sanjay Kumar, project coordinator, Sehgal Foundation, agrees as he can easily compare the before and after scenario. He highlights two major changes: the self-confidence that women have gained through the initiative, and their role in decision-making processes, which has seen a paradigm shift.

“Before women hardly spoke with us, also because there was not much to share; now, it is very different, as most women have become aware and confident about what they know, and how to apply it,” adds Kumar.

Savita Gupta, Field Assistant Sehgal Foundation, talks of the times when the women of the village would not be willing to try something new, and every decision would be the decision of the head of the family, usually the father-in-law or husband.

Now, with the knowledge which these ladies have, decisions are informed, and hence, more productive, which is how their self-esteem is enhanced, she adds.

According to a United Nations Human Development Report, only 32.8% of Indian women formally participate in the labour force required in agriculture, a rate that has remained steady since the 2009 statistics.

By comparison, men constitute 81.1% (UNHDR-2011). An estimated 52-75% of Indian women engaged in agriculture are illiterate, an education barrier that prevents women from participating in more skilled labour sectors and decision making processes.

It is vital to bring about a much overdue change to these numbers, for which awareness is an important requirement. Hence, it is not only important to encourage women in rural areas to change mind-sets, but also empower them with the ‘tools’ to facilitate and lead change.