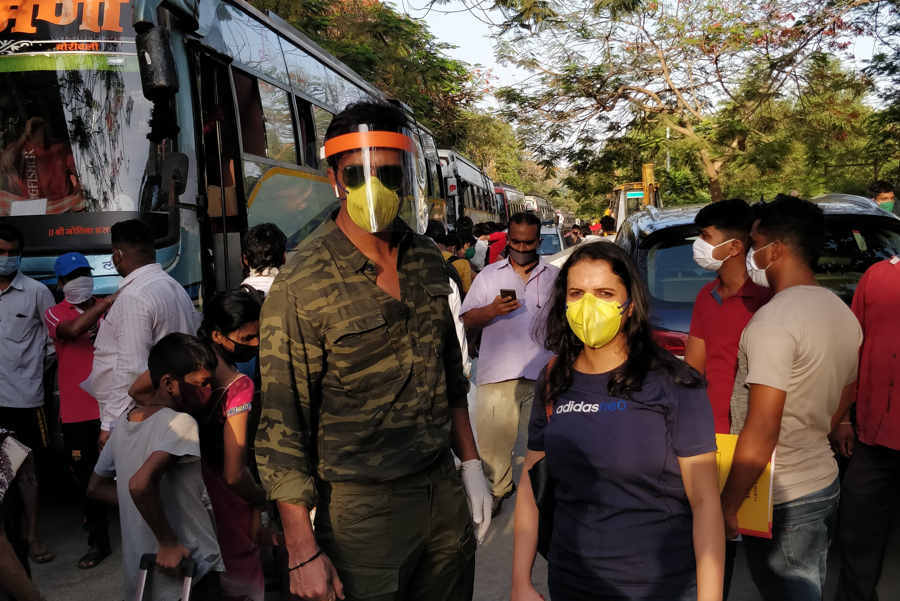 The IIM Women’s Social Action group got together with Bollywood actor, Sonu Sood, to help Indian workers reach home with dignity. This is how they did it.

IIM graduates – all women – from 20 IIMs, across different batches (1975 to 2019) have united around a singular agenda of using their professional experiences and networks to help the less privileged. COVID-19 has brought an urgent intensity to the execution capability of this group.

It all began organically, when in mid-March, Deepa Krishnan (51, IIM Calcutta 1990, Founder, Magic Tours of India) who heads the Abhyudaya NGO, an initiative of Bharatiya Vidya Bhavan, realised that many of her students’ families were suffering due to the sudden lockdown.

Abhyudaya selects slum students from amongst the toppers of schools in the ward and provides them with education. During the Covid-19 lockdown, most of the families had lost their source of income and were facing extreme difficulties.

Deepa shared her distress with the IIM Women’s Mumbai city group and immediately a bunch of women came forward to help these families and they worked on a drip funding scheme after duly verifying and gauging the financial condition of the families.

About 200 families were identified, each impacted in some way – a father who sold combs on trains to make ends meet, a fruit seller, a domestic helper who had suddenly lost out on meals at school for children but also her mid-day meal at the home where she worked.

Many of them had meagre savings but the sudden stop in income was making them nervous. Government ration schemes weren’t easily accessible. The group decided to create a three-month coverage plan for these families.

As news of this initiative spread, more and more IIM women joined, several of them from overseas. Realizing that a lot of marginal families were likely to lose incomes, they came up with a drip-feed scheme to keep them afloat for a few months.

IIM Women are the country’s best MBAs and so of course, nifty excel sheets were drawn up to identify and track progress. The group decided to create a three-month coverage plan for these 200 families.

Each sponsor would take over 3 to 5 families and, at the beginning of each month, transfer an allowance of INR 1000 per family. While the amounts were small, it was decided that providing regular access to funds is better than a one-time provision.

Soon, more than a hundred women were involved. As the lockdown marched into April, newer problems emerged and the women found other projects to help, such as funding the making of masks for distribution in the slums and PPEs for health workers, running livelihood projects in rural areas to empower women and provide employment, etc.

Next, the group learnt of a bunch of workers who had lost their contract employment and were not only without money but also without the means to feed themselves.

Men and boys who had come from Bihar and worked in some of the many Dharavi small businesses, these citizens lived in small 10 by 10 kholis. They used to eat at nearby food stalls, but as the lockdown came into place, those owners shut shops too.

Overnight, these workers were not only forced to huddle up in their tiny, tin-roofed kholis that were heating up like a furnace, but they had no means to buy or cook food.

So, in order to help them, Deepa and the others managed to find a cook (khansaama) who agreed to provide two simple meals a day to 22 of the stranded workers. Within minutes, many more women from the IIM group committed to funding this community kitchen.

As word got around, more workers joined the kitchen project and currently, the facility is looking at catering to almost 1200 people in Mankhurd.  Finding monetary support to feed them was never a problem as more and more women came forward to assist the initiative.

And then the migrant travel started. What began as a trickle from Delhi reached a massive scale and by May, this movement was taking on epic proportions. Hearing stories of the dangerous and stressful travel made it difficult to be a bystander. These were hard-working citizens who had come to cities to earn livelihoods that their villages couldn’t offer.

Most of these people were broke and exhausted from the lockdown, with no end in sight. Within weeks they had gone from hardworking contributors to the economy, to people who had to subsist on handouts or take the dangerous path back home, either by walking for miles in the scorching summer or loading up in unsafe trucks.

The tickets home cost them their life’s savings, and they often had to take loans. What really upset the group was the loss of dignity this was forced upon these workers. “What can we do to give them a passage of dignity?” “How can we help make this easier?”

Just as these questions were keeping the IIM women awake, news media reported that Bollywood actor, Sonu Sood, had begun an effort to secure inter-state travel permissions and sent the first batch of migrants from Mumbai to Karnataka.

Ashu Tomar from IIM Indore seized upon this opportunity and, along with Manimala Hazarika and Sarmila Pande (both from IIM Calcutta), they called Sonu Sood and offered help.

Mr Sood welcomed the gesture. The group moved fast and within days had set up a fundraising page on Milaap. The goal was to raise INR 50 lakhs, but within a matter of days, the group ended up raising almost INR 59 lakhs in under two weeks.

The IIM Women’s Social Action group is a loosely structured community of highly qualified and capable women. Besides the commendable job of fundraising, they also supported the effort by organizing migrant data and working closely with Mr Sood’s team to streamline processes and manage service providers.

In helping people, there is no task too small and no person too big. This became apparent when migrants needed to be called to verify their data and confirm their travel details – from fresh graduates to those with three decades of experience – finance whizzes, strategy consultants, CEOs alike dived in to make phone calls.

Speaking to distressed people, understanding their stories, explaining the process and finally making them get on the buses has been a peep into their world. There were some stories and emotions that stayed with the group.

One of the migrants, Chintu Mandal, who worked as a cook in a few houses, got so emotionally overwhelmed at our team’s care and concern, he said, “aaj kal kaun poochta hai.”

Diwakar is from Bhavanipur in Darbhanga.  Along with his wife and parents, he is currently quarantined in a school and working in a showroom in Ville Parle. They could not get on the train and were very happy when they got the opportunity to go home by bus.

The group has sent over 1200 migrants back and sent more than 29 buses across 5 states (UP, Bihar, Jharkhand, Odisha & Kerala), covering 11 cities. When the first lot of buses got flagged off a few weeks ago, it was fitting that the group of workers in Dharavi who were part of the small kitchen project were amongst the first to be sent to their villages in Bihar.

“Speaking to distressed people, understanding their stories, explaining the process and finally making them get on the buses has been an experience as rewarding as gut-wrenching”, said Alka Tiwari, one of the IIM alumna who is involved in coordinating with the migrants till they reach their home state and are either taken to a quarantine centre or sent home for quarantine.

This project spawned off another activity that has since grown into a full-fledged project in itself.  Sonu Sood’s team on the ground was looking for volunteers who would sift and ratify the growing database of migrants wanting to go to different cities in different states.

Shalini Mehta and Suchitra Laxman joined in and roped in more volunteers from the IIMWSA team. Along with Sukhnanadan Vohra, they set up a Gharbhejo Collaboration Team with 12 other dedicated and extremely passionate IIMWSA members who have taken up the mammoth task of calling and data entry to help coordinate with the migrants for their details and travel.

The volunteers contact each migrant, confirm details, and as their numbers started spreading within the community of people desperate to go back, also started handling a flood of incoming calls and messages. The team expanded its role to work with the core team on a strategy to maximise the efficiency of the efforts being put in.

“The agility with which the IIM women team has supported the cause of the migrants and also provided volunteer assistance has helped our on-ground efforts tremendously”, said actor Sonu Sood.

The IIMSWA group is now almost 200 women, working in different industries, different countries and at different levels. They’re motivated to take on more initiatives and projects that will continue to help communities.

In a post-COVID world, the challenges are going to be daunting and unprecedented. Solving them will require a combination of deep empathy, critical thinking and problem solving: qualities the IIMWSA women leaders bring to the table.

Many of them have become close friends through these experiences and are likely to continue working together, and this time not just to grow and build businesses, but to create a better world for all.

Manimala Hazarika is an entrepreneur and a strategic brand and marketing consultant specializing in the consumer product industry. An MBA from IIM-Calcutta, she has a rich work experience of over 20 years in the field of Business Management, Sales & Marketing, Brand and Product Development across diverse industries panning Consumer Durables, FMCG and Media. Currently, an entrepreneur, her startup Mums ‘n’ Babies is in the Pregnancy & Parenting space – comprehensive care and support platform for Expecting Mothers and New Mothers.