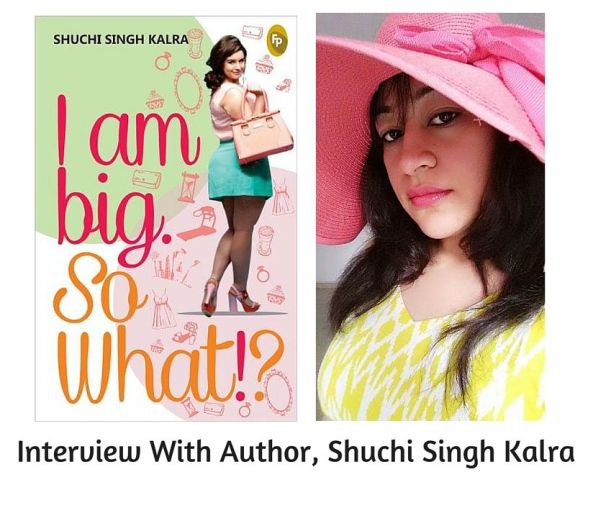 Shuchi Singh Kalra is a gifted author and has written a number of articles for Naaree.com. In this freewheeling chat with Pallavi Bhattacharya, she discusses her new book ‘I am Big, So What?!’ which deals with the topic of body shaming – or shaming a person for their appearance.

In an age when publications are cluttered with weight loss articles, glossy magazines are splashed with size zero figures, every nook and corner of a neighbourhood has clinics to sculpt the body into an hourglass figure, this lovely fictional book titled ‘I am Big, So What?!’, works towards cultivating a positive body image.

The protagonist Roli who is on the larger side is happy-go-lucky and lives life to the fullest instead of lamenting her extra pounds. The book is available on Amazon, Flipkart, Infibeam .

What inspired you to write the book ‘I Am Big, So What?!’?

I got so ticked off with people calling me fat that instead of rolling my eyes, I decided to write a book about it. Jokes apart, body shaming is real, it exists and is not acknowledged enough.

It is a subject close to my heart because I have been at the receiving end of it, as have many of my friends and people I know. And it comes in so many forms – jibes on complexion, height, body type, cup size, penis size, and the list goes on. Regardless of what it is about, it’s nasty, demeaning and I wish it would stop.

Is it, by chance, partly autobiographical?

Well, every piece of fiction an author writes is autobiographical in some way. While the idea for the central theme came from within, Roli’s story is not my story. But it is a story most women (and even men) will be able to relate to for various reasons because the core emotions are universal.

None of us are born perfect, and we all go through moments of self-doubt and insecurity before we eventually learn to accept and embrace ourselves for who we are.

Did you interview large women as to how they were fat-shamed to write this book?

Being a large woman myself that wasn’t really necessary, but I did read up on the subject a lot. I have seen people – both men and women – go through the trauma of being ridiculed for their appearance, and even discriminated against socially and professionally. I didn’t formally interview anyone but I did build upon some experiences of my friends.

This book elaborately discusses ‘fat acceptance’ (having a positive body image irrespective of size) very well. Feminists around the world are joining into the movement in great numbers. What are your views on the movement?

It is heartening that there are finally voices speaking up against this kind of abuse, although I don’t really see it as a feminist movement because it affects men, women and children, albeit to varying degrees.

Though people of both genders face social discrimination, I feel that women are the greater victims because of misogynistic attitudes that prevail. For instance, I have seen that female models are chosen for weight loss commercials and a male model is chosen for weight gain commercials. Do you agree that women are targeted more as far as fat-shaming is concerned? Why do you think that such an attitude prevails?

Women are definitely under more pressure to look a certain way, and the world is more forgiving towards men in general, appearances or otherwise. Any woman who falls outside of the fair, tall and thin bracket is seen as an anomaly.

Patriarchal mindsets are partly to blame for this, as are media-propagated stereotypes. The word ‘beauty’ is so grand in itself, and it is a pity that we have come to define it in such narrow terms.

You’ve captured very beautifully how in India people chip in undesirable comments on body size and how to lose weight. Why do you think that Indians have this peculiarity?

I believe it happens across the world, or why else would the Body Positive Movement be such a big thing in the West? The way it is dished out may be different due to social and cultural reasons.

We Indians are still new to the concept of personal boundaries, especially the elder generation. Well-meaning as it might be at times, it can get annoying very quickly.

If I had a penny for everyone someone told me “You’re pretty but you’d look prettier if…,” I’d have been a fat billionaire diva by now!

It’s unfortunate that most people subscribe to the sweeping generalization that all fat people are slothful and gluttons.  The same has been beautifully addressed in your book as well. Newspapers and magazines through their articles encourage this generalization to prevail as they mainly talk about exercising hard and controlling diet. Whereas it’s a good idea to have an exercise regime and eat healthily there aren’t too many articles which discuss thyroid, illnesses and other metabolic disorders which cause weight gain despite monitoring calories and exercising. Do you think that there should be awareness programmes not to slot all fat people as lazy and gluttons?

Absolutely! I don’t advocate unhealthy lifestyles at all but at the same time, there are thin slothful gluttons just as there are fat slothful gluttons. A person’s weight or body type is not the only indicator of health and fitness.

People can be overweight for a variety of reasons and I’ve known plus-sized women who are national-level swimming champions, salsa dancers and marathon runners. So that generalization definitely needs to go.

Awareness about medical and hereditary issues might help, but before that people just need to learn to accept and respect anyone that looks different or doesn’t fit into their idea of beauty. We are humans, not mannequins, and we come in different shapes, sizes and colours.

Roli is bullied in school for being fat. What measures should be taken to prevent the bullying of fat children? How should these bullies be dealt with? In some schools, teachers and the principal bully fat kids as well.

Parents and teachers have a huge role to play in fostering a healthy environment in school, not only for overweight children but for any child who is susceptible to bullying, which includes differently-abled children too. Teachers need to be sensitized towards the psychological scars that can result from these experiences.

Kindness, empathy and sensitivity aren’t things that can be taught in the classroom or through corporal punishment – adults need to lead by example. Being observant of children’s’ behaviours, intervening appropriately when required and imparting the right values from an early age may help in bringing about a shift in mindsets.

Large women always have a trying time finding nice clothes for their wardrobe. It’s not that they are a minority. In fact, according to a recent newspaper article, one-third of women in Indian cities are overweight or obese. So, there must be a huge demand for clothes for plus-sized women. Then why is the supply of the same so less?

The clothes! Oh man, don’t even get me started on the clothes! Just because thin is aspirational, brands don’t see overweight people as a target market. High street fashion is mostly designed for models who fit into a certain set of statistics, and the general (and outrageously wrong) perception that plus-sized women cannot, or should not have the confidence to carry off something stylish.

The few brands that do cater to larger body types, usually have clothes so sad looking that you wouldn’t even wear them to a funeral. Also, plus-sized friendly brands usually use regular models in their marketing campaigns and plus-sized models are severely under-represented everywhere.  Dear clothing brands, more spunk in your plus-sized collections, please!

Your book covers fake, fad and harmful diets briefly as well. The feminist movement encourages lawsuits to be filed against these diets. What is your view on this?

I can’t comment on lawsuits because until the society and media continue to propagate a cookie-cutter definition of what is beautiful, it will breed insecurity in young minds and they will continue to find newer and more harmful ways to squeeze themselves into that ideal.

We need to evolve as a society and be more accepting and respectful towards bodies of all shapes, sizes and colours.

Rejection can be done courteously. However, it’s often done very cruelly, especially when a guy rejects a girl. The same is dealt with in your book. Do you see misogyny behind this?

The pain of rejection isn’t gender-specific. Men get rejected on physical grounds equally, if not more. It entirely depends upon an individual how he/she chooses to end a relationship.

A mature, self-assured person will always try to close it amicably and respectfully, while an insecure one is more likely to resort to cruelty and insults. Most often, the way you treat others is in direct relation to how you treat yourself.

Apart from the size issue; your book also covers issues like women getting no respite from household chores as husbands refuse to share domestic responsibilities, stigmatizing an unmarried girl who has crossed society’s determined cut off age for marriage and compromising one’s life and career because of the rules and regulations laid down by one’s matrimonial household. Please share more about your views on these issues.

I didn’t realize I covered that until you mentioned it! I guess that reflection just came from observing things and people around me. Isn’t it the reality of our society and aren’t we all expected to carry out our pre-sketched roles to stereotypical perfection?

Come to think of it, Roli is not even that rebellious, and yet, she is always questioned for her choices and decisions. Imagine what challenges the real unconventional ones have to face!

Are you planning to write another book? Will it be chick-lit or of another genre?

Yes, I’m planning to write many more books. My next is not a chick-lit but it is still woman-centric, with a slightly darker, more complex theme of emotional abuse. I hope to experiment with other genres too in the future.

‘I am big. So what?’ is published by Fingerprint Lite and available on Amazon.in, Flipkart, Infibeam and UReads.