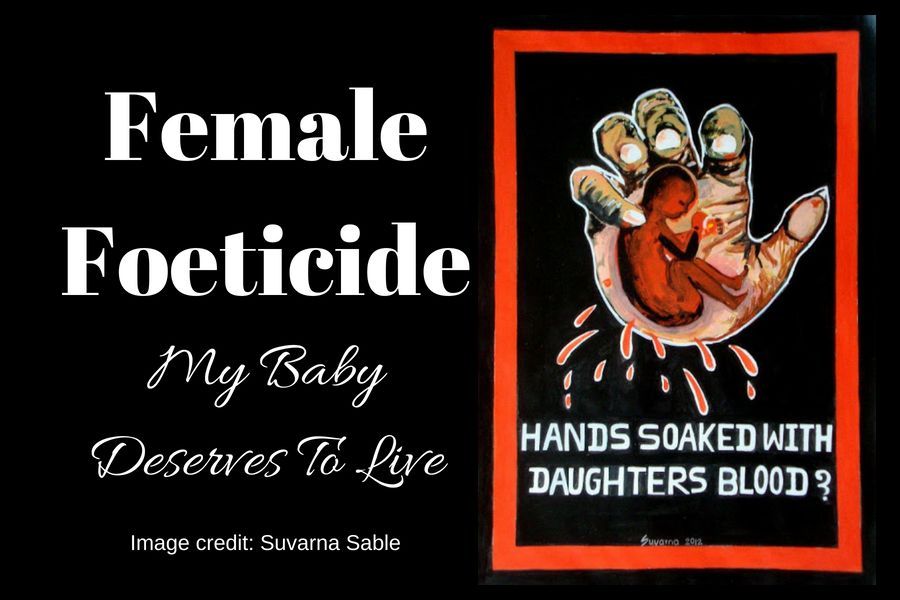 Asian countries have always shown a soft corner for the male child – he would be the heir, he would carry the family name forward and he would most certainly take care of his parents in old age.

While forceful abortion started in ancient civilizations, determining the sex of the child and aborting it is a fairly recent addition to female foeticide. Khushboo Aulakh discusses the discrimination of Indian society towards the girl child.

Rock a bye baby…on the tree top…when the wind blows…the cradle will rock. Every woman has a dream to sing a lullaby and put her baby to bed.

No matter how cumbersome the delivery is, giving birth is the feeling that every woman wants to experience. When techniques like ultrasound weren’t available, girls were simply killed when born – a practice called infanticide.

The anxious mother was quickly informed that she had given birth to a stillborn. And now when people can determine the sex of the unborn fetus, it is easy to kill the girl in the womb.

While most abortions have to be carried out within the first trimester, there is no shortage of clinics which offer abortion-related services up until the third trimester, thus putting the life of the expecting mother in grave danger.

Abortion in the third trimester or later kills the fetus using a technique called intrauterine cranial decompression, which requires surgical decompression of a fetus’s head before evacuation.

The world ratio for induced abortions is 26 per 100 known pregnancies. The actual ratio may be much more – in countries where abortion is banned, most women resort to back-alley abortions.

Although this number includes the total number of fetuses killed and does not give segregation between male and female, it is safe to assume that most abortions carried out in India are for aborting the girl child except in cases where a woman decides to terminate an unwanted pregnancy or certain medical conditions specified by the gynaecologist.

The country comprises of Hindus as the largest sect. Quite contrarily, Hinduism teaches that abortion is a crime and is one of the worst sins. It is one of the six kinds of murder described in the Hindu culture.

According to Hindu texts, abortion thwarts a soul in its progress towards God. Unfortunately, most people seem to have forgotten what their religion teaches in the desire for a male child.

The widespread availability of diagnostic testing, during the 70s and 80s, also led to advertisements for services which read, “Invest 500 Rs. now, save 50,000 Rs. later”.

Between 1985-2005 as many as 10 million fetuses may have been selectively aborted. The WHO estimates that 19 million unsafe abortions occur around the world annually out of which 68,000

Female foeticide has led to a completely skewed sex ratio in many parts of South-East Asia. The irony is that families who wanted sons to take their legacy forward cannot get their sons married because there are simply no girls to get them married to.

This is a common occurrence in most villages of Punjab, Rajasthan and Haryana. People resort to buying girls from poverty-stricken families of East and Central India.

The economic role of men, the costs associated with dowries and a Hindu tradition, which dictates that the last rites must be performed by a male relative have led to a cultural preference for sons.

Although a lot of families are now keen on having daughters and give equal rights to both son and daughter, the mindset is still attached to prehistoric traditions.

While female foeticide is common in villages and other under-developed regions, the urban home is also not free of it. What is surprising is that educated families harbour this notion. And yet again, these families teach their daughters the importance of having a male heir.

It becomes a vicious circle then, generations after generations who think that giving birth to a male child is next to achieving salvation. Women do not want to give birth to women.

The newspapers are coloured with examples of women achieving starry heights professionally. So many women have reached beyond the glass ceiling and have amassed success that no man could possibly have.

But we remain stuck to having a male child when a woman can achieve all that a man can and much more. Is it because the society firmly believes in patriarchal living or we need guidance from men to make every move?

Even with women achieving success beyond compare, we hear stories of an abandoned female child, of a woman burnt, of a woman who was ostracized because she could not give the family a male heir.

Television and radio have, time and again, published public service announcements educating people that the sex of a child is determined completely by the sex chromosomes. Yet, we do not wish to learn.

We try to kill, maim and destroy a life, which is not yet born so that another favourable life can be given birth to. And yet we think that this act will give us what we desire for – moksha or salvation. It is alarming to even try and understand how an act of violence can lead to salvation!

Let us just hope that the South-East Asian mindset keeps progressing so that we have girls in every household – happy and content to be equal to their male relatives.

Certain statistical data has been cited from the following sources: Abortion