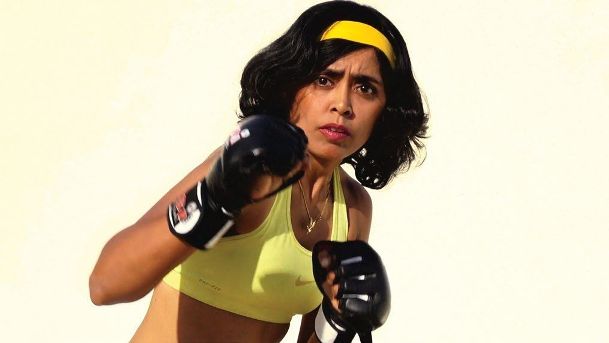 Her calm and friendly disposition belies the fact that she is the first, and till now, the only woman commando trainer in India. Having black belts in several martial arts, and being a 7th-degree black belt holder in military martial arts, this charming and lithe lady of 5ft 7 inch can easily kill a well-built person with her bare hands.

But there is no reason to be apprehensive in her company, for she is extremely peace-loving and compassionate, and always tries her best to not hurt anybody, physically or otherwise. Swarnendu Biswas interviews martial arts expert and commando trainer, Dr Seema Rao.

The Art of Becoming Superwoman

They have close to 20 years of experience of imparting commando training to various forces in India, all of which they did without compensation! Her hobbies are as fascinating as her passion for commando training; they include scuba diving and sky diving.

“I love to view the world both from the bird’s eye view as well as from the dolphin’s view,” she said along with engaging laughter, which put me at ease before her magnetic personality.

She did earn her Para Wings by qualifying in the para jump course of the Indian Air Force Adventure cell. “My assignment of training the IAF commandos was my inspiration to earn my wings,” Seema reasoned.

These are not her only amazing aspects. The combat shooting instructor also has a medal in mountaineering and rock climbing from the Himalayan Mountaineering Institute, complemented by the fact that she was also a Mrs India World beauty pageant finalist.

Describing Seema, who has an MD, an MBA in crisis management, and a PhD degree, as a multifaceted lady or a woman of great substance seems too much of an understatement. I finally realised that “Superwoman” is not a myth… and that she can be very down to earth too, making sincere efforts to put a poor journalist, in awe of her, at ease.

It surprised me further when she revealed that she was bullied in school. “But I nursed a deep desire to be strong and in control. I yearned for the power to dominate my fear,” she reminisced.

While on their journey to excel in martial arts, they also acquired great skills in sports shooting and weapon defence skills. “I could shoot an apple off a person’s head from 50 yards without giving him a scratch and I could evade a speeding bullet aimed at my head with ease,” Seema said laughingly, without any trace of pride, as my jaw dropped further.

Daughter of Professor Ramakant Sinari, a freedom fighter, the seeds of patriotism began to sprout within the recesses of Seema’s mind since her childhood years. “I often used to hear from my father stories about his participation in the freedom struggle, which stirred patriotic feelings in me,” notes Seema.

She firmly believes that “Great desire often finds its own opportunity.” The ardent desire of the Rao couple to do something constructive for the country was channelised into commando training for various Indian armed forces.

“We have trained the Indian forces for close to 20 years in the capacity of Guest Trainers. About two decades ago, we made the decision to go fulltime into armed forces’ training without accepting any compensation. Two factors inspired us to take up this Herculean challenge. One was the intense patriotism and the desire to serve the personnel who guard our freedom and/or protect our people, that too without any monetary gains. The other was the instinctive need to get engaged in combat,” says Seema.

They carried forward their resolve to train various Indian forces without compensation, despite the fact that, in the initial years of their marriage, they were plagued by financial hardships.

“During the nineties, we got invited to give many demonstrations to various forces and invitations for conducting courses began flowing in. Eventually, we approached the then Army Chief, the then Navy Chief, and the then Paramilitary DGs and they all approved our training courses for their commando personnel. That is how our journey to train Indian armed forces began,” narrated Seema.

And what a fascinating and challenging journey it was; a journey that is still on!

“We have possibly trained every known and unknown force in India. “Commandos from the Indian Army, Indian Navy’s MARCOS, Indian Air Force’s Garud, National Security Guard Black Cats, ITBP, BSF, Police QRTs of 16 states have been trained by us,” she elaborated while discussing the Rao couple’s huge purview of training across various Indian forces.

Until now she and Hon Major Deepak Rao have trained over 15,000 personnel from various Indian forces. And they have not hung their boots up as yet. “We are always earnest to train the Indian forces and serve the country,” asserts Seema.

Dr Seema and Hon. Major Deepak Rao’s nationwide fame is largely due to their huge strides in the realm of Close Quarter Battle (CQB). To them goes the credit of developing the ACCS or Advanced Commando Combat System which is a unique and modern method of CQB.

“Close Quarter Battle is the art of fighting at close quarters, that is within 30 metres. CQB includes anything and everything that can be used in proximity combat such as reflex shooting with rifles, quick shooting with pistols, and also entails the precise use of knives, bayonets, and other appropriate combat weapons. It also involves bare-handed combat,” explains Seema, adding further, “CQB also deals with the art of force multiplication, i.e. it deals with how a small team of commandos can take on a larger force on the mere basis of physical prowess, skill and protocol. Room combat and confined space combat such as anti- hijack operations also come under the purview of CQB.”

The discussion on CQB followed the evolution of the Advanced Commando Combat System. “ACCS or Advanced Commando Combat System is the name we have given to our modern method of CQB. We researched many CQB methods while training personnel from a cross-section of Indian forces and eventually reinvented the best possible CQB techniques, for the exclusive use of our Indian forces only,” proffered Seema, while maintaining that “ACCS is recognised as a military martial art worldwide.”

According to her, “ACCS is largely different from conventional CQB. The reflex shooting method with ACCS is unique. It is our gift to the Indian forces. Moreover, the unarmed methods with ACCS are easy to learn and their exercise can quickly handicap or cripple the enemy with the least effort. The team tactics with ACCS are different too and prescribe employing only one woman/man for one task as opposed to conventional western CQBs which generally entail that all team members are to be engaged together in executing one task.”

The Rao System of Reflex Fire

Here it deserves a mention that, based on their years of experience in training Indian forces, Dr Seema and Hon. Major Deepak Rao developed an indigenous method of reflex shooting, which is known as the Rao System of Reflex Fire.

“The conventional methods of shooting generally uses up many seconds to aim precisely and then shoot. This is beneficial in long-range combat when the enemy is, say 300 yards away, covered by a rock. But when the enemy is just 20 yards away and in front of you, quick shooting without using too much time for precise aim is needed. To cater to this need in modern warfare, we devised Rao System of Reflex Fire. The Indian forces have found this very beneficial,” affirmed Seema.

However, here it is worth noting that the Rao couple has purposely limited the dissemination of their awe-inspiring commando training skills and all their innovations in the field of military training to the Indian forces only.

The Role of The Unarmed Commando Combat Academy

The Rao couple also constituted the UCCA or the Unarmed Commando Combat Academy, an elite military martial arts academy, to help train the Indian forces and also to publish training books for the forces. It is a government registered NGO.

“With UCCA, we have published seven books till date and three of these are limited editions for the exclusive use of the Indian forces. Our book Encyclopedia of Close Combat Ops is the world’s first encyclopaedia on CQB training and it has found a proud place in FBI library and the INTERPOL library,” notes Seema.

UCCA also has a civil chapter which runs the Jeet Kune Do Ideology centre. This academy offers training in Jeet Kune Do, a martial art discipline founded by Bruce Lee.

“We also teach a variety of other exotic martial arts to civilians and have an Unarmed Combat Blackbelt program for civilians. However, these services are in lieu of the fee,” stated Seema.

It is worth noting that JKDI is not only about martial arts. This centre deals with holistic human development at all levels, which entails physical fitness, nutrition & weight management, spirituality and philosophy, life management & self-improvement skills, martial combat for adults and healing & health management.

Seema feels very strongly about women’s safety and their physical and mental empowerment.

“I have designed a program specially tailored for ladies to deal with eve-teasers, molestation, sexual assault and rape. It is called DARE (Defense Against Rape and Eve Teasing). The ‘DARE’ program is equipped to prepare women, both mentally and physically, to face adverse situations posed by potential eve teasers, molesters, and other sexual assaulters,” she informed.

She minces no words when she categorically states that “all my film scripts will always feature hardcore action where the woman beats up the bad guys.”

The Price and the Pride

Greatness often comes at a price, and Seema was no exception. She had to repeatedly prove herself in the male-dominated field of commando training, and often brave hostile terrain and highly uncomfortable weather conditions.

“I frequently meet different trainees in every course, many of whom are resistant to learn from an outside resource, leave aside a woman. I not only have to discipline them, but also have to gain their confidence in my ability to teach. However, eventually, I have always managed to earn the respect of commandos I have trained,” she said with unmistakable pride in her voice.

Moreover, she had to endure multiple injuries towards fulfilling her noble calling for the country and had to forgo motherhood in the process. But despite all these sacrifices, her body and soul are still committed to the nation and to the exciting and exacting world of combat arts.

She was bestowed with several awards during her amazing and inspiring journey, which include the World Peace Award at World Peace Congress in Malaysia, US President’s Volunteer Service Award, and three army chief citations among others. But she considers her greatest reward her satisfaction in training the Indian armed forces.